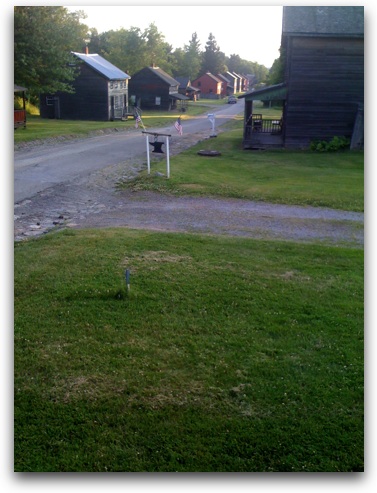 Eckley Miners' Village should have been a ghost town in the mountains of northeastern Pennsylvania, but a series of miracles happened.

In the late 1960s, Paramount Pictures thought this would be a great location to film "The Molly Maquires" starring Sean Connery, Richard Harris and Samantha Eggar.

Eckley had hardly changed since the mid-1800s. The buildings represented a typical "company town" of the Anthracite Mining region of Pennsylvania. It looked the part that was needed for the movie's era and locale, where families really lived.

With an 11 million dollar budget, Paramount was able to restore Eckley, Pennsylvania, including moving the electric wiring underground and pulling off post 1870s features, such as TV antennas. 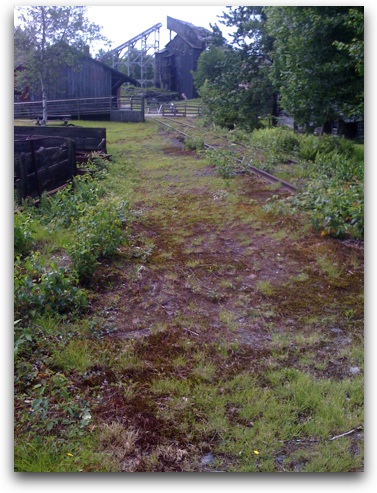 Paramount constructed a large coal breaker near the middle of the town to provide a background that established the town's mining status.  They also constructed a series of mining cars. They are four-wheeled cars with link and pin couplers and hand brakes. Many of these cars still exist, though some of them are badly deteriorated.

The Pennsylvania Historical and Museum Commission took this treasure town and preserved it by turning it into a large living history mining museum. Creative financing has helped to preserve this wonderful town. Living historians - and other residents - can actually live here by paying rent and agreeing to a strict set of rules that preserves the historical character of the village. The cars that you see on the streets are antiques. The facades present a company town appearance. 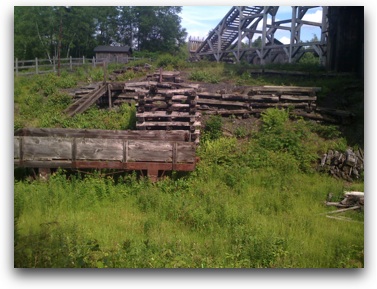 Patch Town Days are held annually on the third weekend in June. In 2013, the event will be on the 15th and 16th of June.


Kent Courtney will be making personal appearances with performances of historical music on both days of the event. He will be singing a mix of union organizing songs, railroad songs, mining songs and Irish songs. 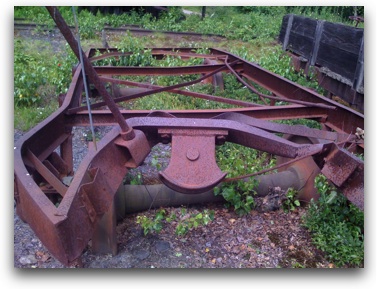 His stories will include the struggles that lead to the formation of the United Mine Workers - including some interesting facts about the fabrication of events surrounding the Molly Maguires. In his research, he has discovered a connection between the mine owners' persecution of their own workers in Pennsylvania and the mine owners in Colorado. Their tactics - and the pawns of the mine owners - were the same.

There are a lot of things to do during Patch Town Days at Eckley Miners' Village. Many different occupations are represented by knowledgeable actors who portray the lifestyles of people in the anthracite patch in the 1800s and early 1900s.

You can watch girls washing clothes and see food being cooked over a campfire. There's a policeman, fancy gentlemen, ladies and many mine workers are portrayed.  Eckley Miners' Village truly comes to life.

Two working blacksmiths will provide continuing demonstrations at the Blacksmith shop where visitors can watch the fabrication of iron tools in a forge typical of the type used in mining areas. Specialized tools were required to drill holes for blasting in the mines with the hand-powered drilling methods used to create the holes where dynamite would be inserted to open up coal seams. 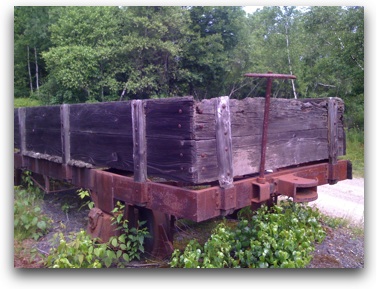 
Small hand drills looked like chisels when driven and hammered by one person - single jacking.  Double jacking drills were longer, being used by a two person team.  In double jacking one person would hold a bit and twist it as another used a large sledge-like hammer to create the holes for the dynamite.  Both of these styles of bits wore out quickly while being hammered into the coal and rock. So, the blacksmiths were constantly busy sharpening bits and creating new ones.

Without the railroads, the coal business could not have developed the industry associated with the nearly smokeless anthracite. In the 1870s, the four-wheeled train cars used to haul coal were called "jimmies". These short cars are represented by the left-over props from Paramount's movie, "The Molly Maquires".

There are many details to be found in this living history village that offer model railroaders a chance to look at an earlier period's lifestyle that can be translated into accurate scenes on a train layout.  The Molly Maguires was nominated for an Academy Award for Best Art Direction, so the source for this look has won critical acclaim. It's always good to look for "best examples" when choosing prototype scenery.

Posted by Kent Courtney at 7:50 AM No comments:

The weather was beautiful for the start of the Civil War steam train excursions out of New Freedom, PA. This would be just another photograph except for a chance inclusion of Debi Dwyer Beshore in the left background. As usual, she is busy on the cellphone, coordinating a dozen things at a time in her role as Manager of Steam Into History. 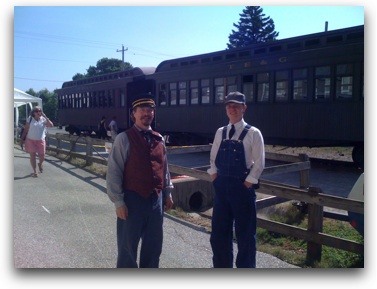 Somehow, this looks like a scene out of The Waltons with Kent talking to the Fireman of the "York", number 17 of the Northern Central Railway - pictured in the background. 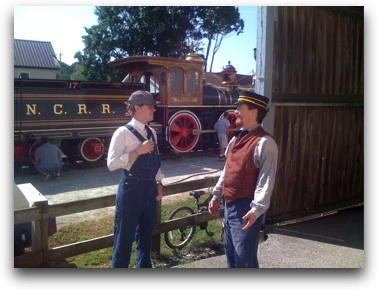 For the start-up celebration, Kent provided the PA system, and of course sang some of his favorite Civil War and railroad songs, while telling the story of the Northern Central Railway. That guitar amp at the lower left of this photograph is a Peavey Austin 400, Kent's favorite guitar amp. 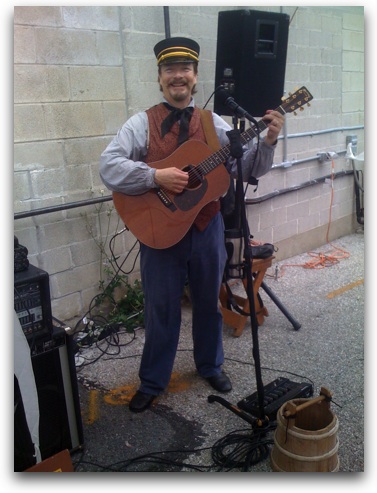 There she is, the "York" under steam and smoking up a storm as she heads toward Glen Rock, Pennsylvania. 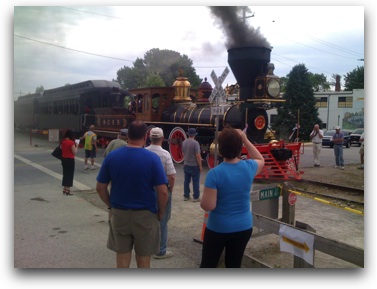 Today's excursion was sold out and there were many people who couldn't get a ticket. Because of the popularity of this Civil War train ride, it is suggested that you get tickets online at http://www.steamintohistory.org

Posted by Kent Courtney at 4:57 PM No comments: