On March 15, 2014, come celebrate our Irish Heritage with Kent Courtney. Kent will sing and perform Irish Music on the Steam into History Excursions embarking in New Freedom, Pennsylvania.

Kent will tell the stories of the Irish immigration into these United States and how they helped build the Northern Central Railway, starting in 1828 with the Baltimore and Susquehanna Railroad. 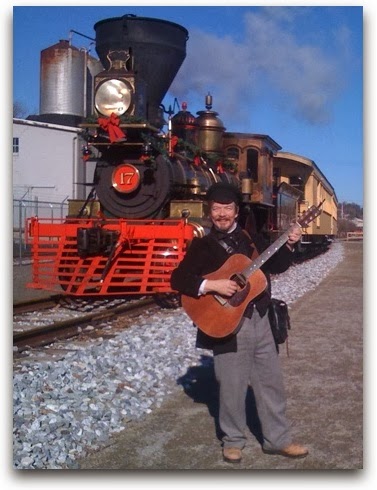 Kent's music will put you swinging hammers on the track gang and unwinding after a hard day's work in the tent cities that accompanied the construction of the keystone railroad that became the Northern Central and later the Pennsylvania Railroad.  This railroad connected Baltimore, York, Harrisburg and points North.

During the time of the American Civil War, the Northern Central carried troops and supplies to the battle fronts.  Many wounded and sick soldiers road to hospitals.  The dead were carried, too - including Abraham Lincoln's Funeral Train on its sad trip back to Springfield, Illinois.

For more information go to the Mobile-Ready website:
http://www.steamintohistory.org

Or the Main website where you can purchase tickets to the excursions on line:
http://www.steamintohistory.com

Posted by Kent Courtney at 9:38 AM No comments: