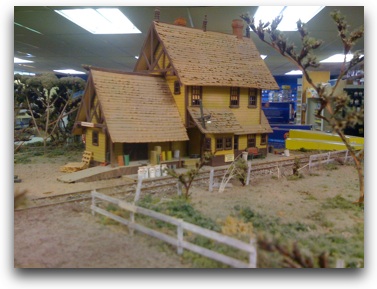 This is an HO scale Railroad Station model at Gilbert's Hobbies in Gettysburg, PA.  If you are coming to Gettysburg during the 150th Anniversary year, you want to visit this fine hobby shop that has a wide selection of various hobby items, focusing on model railroading in HO, HOn3 and N scales.  They also have pre-painted Civil War miniature figures.  Their mobile-ready web site is: http://www.gettysburghobbies.com

The headquarters building of Steam Into History is in New Freedom, PA at 2 West Main Street. The building is right next to the York County Rail Trail and the tracks that they will be using to run the Civil War steam train excursions. Steam Into History will be using an American-type, 4-4-0, which is a reproduction of a typical Civil War steam locomotive. http://www.steamintohistory.org 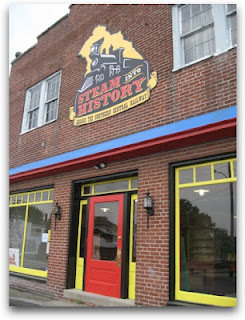 Last week, the trucks arrived for the passenger cars that will be used for the first phase of the steam train operation. They are a derivative of the journal box, Bettendorf T-Section trucks. They look a lot like the Pennsylvania Railroad Class 2D-F8 50-ton freight. The bolster might have been replaced, which makes positive identification questionable. The actual 2D-F8 had a riveted bolster.  It's not unusual to have train equipment with mixed lineage.

The journal boxes contain oily rags that serve as lubrication for the end pins of the wheel to rotate within. The journal boxes are at the end of the cast frame, which resembles a "T".  The cast frame has springs that support the bolster. This sprung support cushions the ride, much like a rubber tire cushions the ride of wheels used on a bicycle or automobile. The bolster of the truck supports the railroad car above it by attaching to the underframe of the car. Usually, this is done by means of a pin that goes into a hole in the bolster of the truck. On a real train, the weight of the car holds the truck in place. On model railroads a screw or snap keeps the truck attached to the underside of the railroad car. 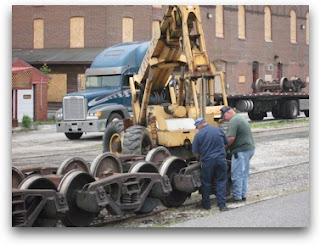 This is the view from Main Street in New Freedom, PA looking north with the York County Rail Trail and the Steam Into History Headquarters on the right. 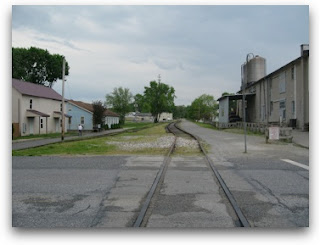 Looking south from Main Street in New Freedom, PA, the York County Rail Trail is on the left. The New Freedom Trains station is also on the left. It contains the Rail Cafe (a great place to eat), a museum and nice restrooms (that's a real plus). 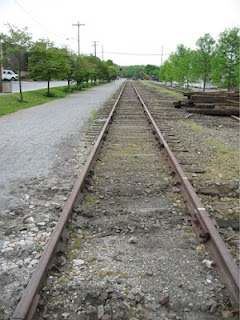 Note that the ballast is not only multi-colored, but it also has a variety of sizes of ballast. Modelers should remember that ballast is rarely one uniform color.  Looking at color photographs of railroads in the 1950s, it amazes me how there was such variety of ballast on one section of rail line.  Repairs and adjustments might be made at different times using ballast from different quarries or sources.

Posted by Kent Courtney at 3:00 AM No comments:

Raid on the Northern Central Railway - Scenes filmed 11MAY13

On Saturday, 11 May 2013, reenactors and civilian actors gathered to film a re-creation of the Confederate raid on the Northern Central Railroad station of June 1863. Rain was predicted all day, but it held off until the shoot was finished. Scenes included civilians at the station and the telegrapher.  The telegrapher was captured by the Confederates to prevent him from warning other stations along the line.

In this photo, the civilians are being briefed about their parts in the film. On the far right, seated on the bench, is John Riggle. John, who is an Executive Producer of the film was General Manager of two television station, including WPMT, FOX Channel 43 (Harrisburg, Lebanon, Lancaster, PA). http://www.riggplus.com 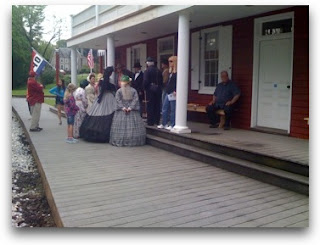 While the civilians were going through their roles, the Confederate Cavalry and the Pennsylvania Militia line up for their safety instructions and roll-call. Facing each other for this line up presaged the skirmish activity that was to be filmed later on. 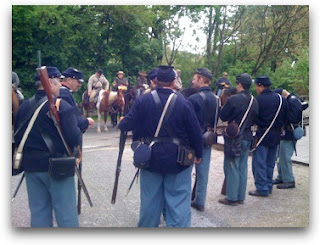 The Pennsylvania Militia moved their line over to the southern grounds of Hanover Junction Station. They "stacked arms" so that they could pull them apart for the filming. I am portraying an Assistant Surgeon of the Pennsylvania Militia. Assistant Surgeon is the rank of an entry-level doctor that would be assigned to tend to the needs of the troops.

On my right, I am carrying a medical haversack, that contains various medicines, bandages, tourniquets and a triage kit. In the case of a wound that cause a bone to be shattered, the tourniquet would control venous and arterial circulation to an extremity while the wounded soldier would be transported to the rear.

On my left is an over-sized, kidney-shaped tin canteen that would carry enough water to minister to the needs of the wounded - as well as myself.  Below the canteen is an officer's haversack containing three days rations (food) for me to eat while on the march.  A plate, knife, fork and spoon, a tiny New Testament, pencils, paper and other personal effects are in there, too.

The belt is a reproduction Pennsylvania Militia Officer's two-part belt. It is similar to the one that General George Gordon Meade wore while commanding the Army of the Potomac at the Battle of Gettysburg, 1, 2 and 3 July 1863.

Notice that my officer's sack coat is longer than the infantry sack coat worn by the Pennsylvania Militia enlisted men. The shoulder boards that I am wearing are gold outlined with plain green in the center, indicating my rank of Assistant Surgeon. 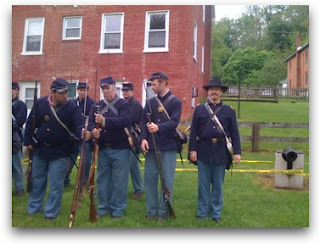 This is the view of the view from the infantry line as they form up, facing the Confederate Calvary. The Hanover Junction Station is to the left. The platform that we are athwart is the same platform that will be used by passengers on the Steam Into History excursions, starting June 2, 2013. http://www.steamintohistory.org 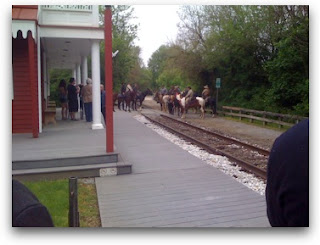 This is the imposing facade of the Hanover Junction Station from the Confederate Calvary perspective. This is the train station that Abraham Lincoln passed on his way to and from the dedication of the soldier's cemetery at Gettysburg, where he delivered his Gettysburg Address, in November 1863. His remains also passed here onboard the Funeral Train that carried his body back to Springfield. 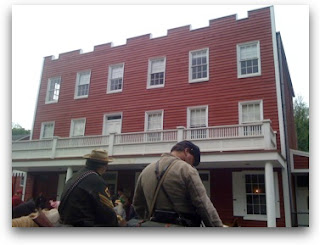 Posted by Kent Courtney at 9:24 AM No comments:

With a profound interest in American History, I'm often working on documentaries. The latest project is on the Northern Central Railway. Since I wrote this part of the script, I guess I can quote what I'm saying in the top-hatted segments.  The first one is about the origins of the NCR:

"The Baltimore & Susquehanna Railroad was a predecessor of the Northern Central Railway.  On the Eighth of August, 1829, the cornerstone was laid with great ceremony and Irish immigrant laborers began construction of the line from Baltimore.  In typical Irish fashion, they worked hard and drank hard creating controversy in the local communities along the way." 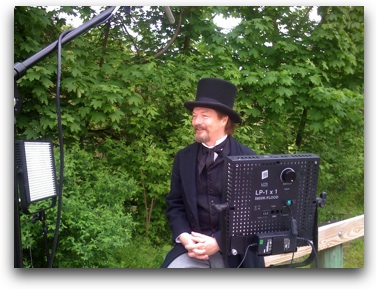 The "talking-head" segments are often short clips meant to fill in what is spoken by the narrator.  Another clip is about Abraham Lincoln's connection to the Hanover Junction Station:

"Passing through the Station on the 18th and 19th of November of 1863, Abraham Lincoln went and returned from his famous Gettysburg Address.  On April 25, 1865, Lincoln's Funeral Train passed here." Another short clip fills in about the current history of the Hanover Junction Station:

"A project to restore the Hanover Junction Railway to its 1863 appearance was completed in 2001." 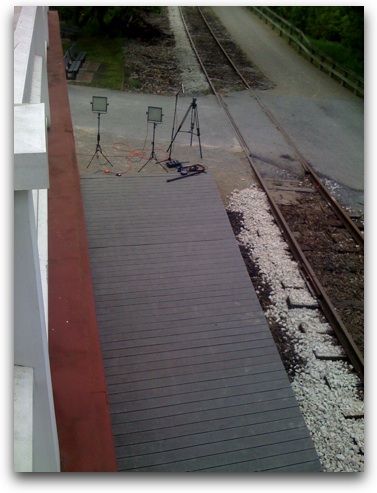 This is a view of one of the set-up from the porch of the Hanover Junction Station. We were granted permission to get up on the porch of the station for the filming of some cut-aways. These are scenes that are shot to fill in the gaps and make smoother transitions for other scenes. 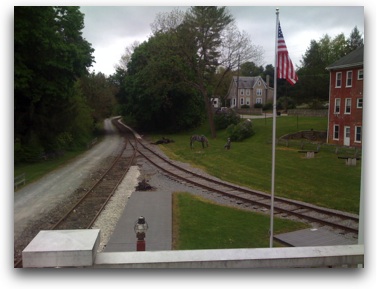 This photo is one of the out-takes from the photo shoot that I was doing at the same time as the film shoot. (I'm always multi-tasking). You can see the photo that I picked for http://www.steamintohistory.org - the mobile-ready website that I maintain for Steam Into History.  I chose the vertical format for the mobile-ready site because I liked the way the converging lines of trees draw the viewer into the photo. The vertical format also gives a focus to the rail line, itself. With the tracks curving around the bend, it makes you want to go around there to see more.

Posted by Kent Courtney at 4:57 AM No comments: