There was an increasing amount of a mass-produced product in the 1920s that warranted its own type of car for transportation. It was the automobile. Cars were being produced by the hundreds - even thousands. They needed to be shipped from the factories to their destinations. A new distribution system popularized the "dealership" that would take delivery of multiple cars in the hope of selling their brand of autos.

Efficiency in Manufacturing and Distribution

Henry Ford found ways to streamline the manufacturing and shipping process. He would crate his automobiles in sub-assemblies and rely on the dealers to set-up and prep the cars. His basic sub-assemblies were the motor, wheels, frame and body. Parts would also be included for final assembly. Henry Ford designed the system so efficiently that even the wood of the crates was used in the automobiles he shipped.

Dick Kilday tells the story of how his father worked as a messenger for one of the dealerships. When a boxcar came in to be unloaded on a team track, it was his job to notify the dealership. In order to do that, he would go down to the railroad yard and wait for the regularly scheduled freight local to drop the consigned shipment at the team track.

He would run to the dealership and several men would go with tool boxes to the team track and begin to unload the sub-assemblies.

Right there - on the ground - the men would put the cars together. The lot next to the team track became the assembly area for the dealership. The first test drive of the cars consisted of driving the cars over to the dealership.

Working Against the Per Diem Clock

The men had to work fast to ensure that the car was ready for the next pull. That is when the car had to be empty and ready for the next freight to pick up. Otherwise the railroad would be charged the per diem rate for keeping the car another day. That cost would be rolled down to the dealership with a little bit added to make a profit for the railroad.

So, the men had to work fast to get the box car emptied and the automobiles back to the dealership. 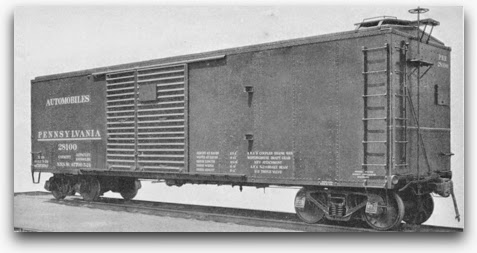 In 1926, the Pennsylvania Railroad developed the X-28 box car specifically for this service. As a late entry into the cities that manufactured automobiles in Michigan, the Pennsy had to offer services that were above that of their competitors. Their engineering department came up with a car that was two feet longer than the standard forty foot car. This design improvement may seem minor, unless you need just a bit extra capacity to fit in crates and frames. Two feet made a lot of difference in what could be packed in.

A Door and a Half

A bigger opening helped, too. Getting auto frames and crates out of the side of a box car involves twisting the product around until it can go through a door. A bigger door means less twisting. But, it comes at a price. A door does not have the structural integrity of the side panels of the box car. So, achieving a balance meant adding a half door to a single door. The doors would be big enough to pull out the loads, but would not sacrifice the side strength of the car and its ability to brace a load. 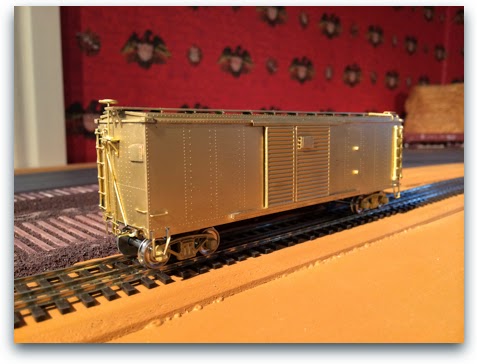 The Oriental Limited Pennsylvania Railroad X-28 was made by Sung Jin in Korea with catalog number 0388. Their 42 foot Automobile Box Car is a good model with a lot of weight. It rolls like the real thing. Tommy Gilbert of Gilbert's Hobby Shop will be painting mine. He will letter it in the original 1926 paint scheme - as in the black and white builders photo above. 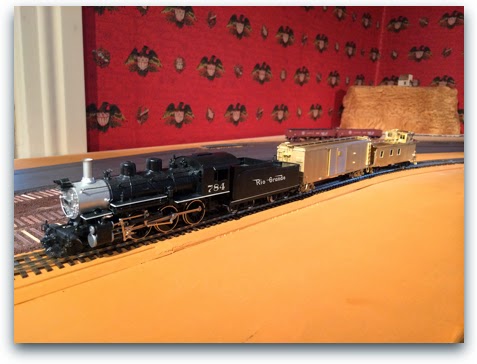 When you look at photographs of trains in the 1920s, PRR freight cars show up a lot. They had a huge number of cars going all over these United States. The Denver and Rio Grande Western is no exception. They received and passed on Pennsy equipment a lot. So, it is appropriate for some of those cars to show up in Colorado, even though the Pennsylvania system was pretty far away.

I will be back dating the paint scheme on T-29 number 784, but ten-wheelers were real workhorses in the 1920s. You could find them in front of freight and passenger trains. Shuffling around an X-28 is right on the mark.

Posted by Kent Courtney at 1:30 PM