Yesterday, I got the phone call from Tommy Gilbert of Gilbert's Hobbies - http://www.gettysburghobbies.com - that the Blackstone Models D&RG C-70 Consolidation came in. I have been waiting for this model since it was announced.

The version that Blackstone produced is a model of a WWI era narrow gauge locomotive of the type that dominated Colorado narrow gauge from the 1880s until well into the twentieth century. The 2-8-0 locomotive hustled freight and passenger trains out of Salida, Colorado in all directions, including the Monarch Branch, which is the center point of the model railroad that I am building. 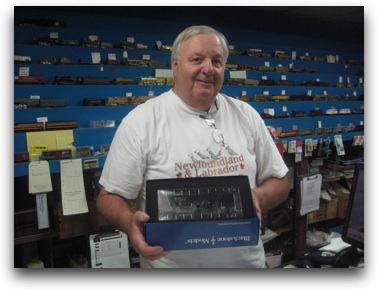 When I came in the shop, Tommy had it ready for me. He's changing the configuration of the shop, so his narrow gauge test track is being moved. But, that's okay. Blackstone packs in the locomotive so well that once it is out of the box, it's easier for it to stay out.

I picked out some Polly Scale Paints, a new palette knife, some styrene strips and a Woodland Scenics styrofoam block and I was ready to take a much needed venture into model railroad land at my home - even if only for a little while. 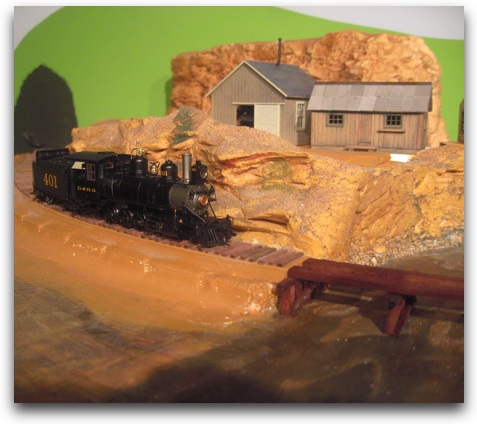 Unpacking the locomotive carefully, I set it up on some BK Enterprises' ties that I had glued down, but hadn't gotten a chance to ballast and lay rails on. You can see the scratch built trestle to the right of the locomotive starting to come to life. Behind the C-70, the tiny town of Garfield, Colorado is going through an experimental arrangement. On the left is an auxiliary building from the Grandt Line 10 Stamp Mill kit - East Terrible Mill and Mining, customized to be a blacksmith's shop. To the right is the Campbell Scale Models Bunk House "B" which should be on everyone's HO layout.

Here are views of D&RG 401 and D&RGW 347, to give a comparison of the C-70 to the previously released C-19. In the 1920s, there were some phases of reorganization, rebuilding and reclassification. The C-70s became classified C-19 and were renumbered in the process. So, these two photo's represent two sequential eras. It is quite likely that in the mid-1920s, one could see mixed paint schemes as the Denver and Rio Grande was reorganized into the Denver and Rio Grande Western.

There has been a great deal of discussion on the internet about what color that boiler jackets were during this era. There are no color photographs of what the early twentieth century locomotives looked like on the Denver and Rio Grande. So, most discussion centers on a few lines of references in shop instructions and letters from the early twentieth century. Tommy and I think that the boiler jacket would have been a lighter color - maybe green or greenish blue. That assumption comes from the use of Russian Iron.

Russian Iron was imported from Russia and was a high-quality iron that surpassed American technology at the time. American iron before 1900 had varying degrees of quality. But, the Russians had developed a special sheet iron that worked well on boiler jackets. The color was probably lighter than black. Tommy believes that the color was a little lighter than the Pennsylvania Railroad Brunswick Green.

In a posting on UtahRails, the author talks about "Dark Green Locomotive Enamel" that could have been used as late as 1940 to paint D&RGW boilers. This posting is interesting as it gives a lot of detail about the possible green coloring of Rio Grande boiler jackets.

It makes me wonder if the 401 should have a dark green boiler jacket, also. Blackstone Models is located in Durango, Colorado. Since they are at one of the centers of the narrow gauge universe, I have to give them a degree of trust for their color choice for the 401.

But, I think Tommy will be putting a dark green color on the boiler jacket of the 1903 K-27, which will look good - and has a good chance of being very accurate. After the weathering is applied, it should be a star model. Tommy Gilbert is one of the best professional model railroad painters in America.

If you want to read a detailed discussion of sheet iron - and a detailed history of the iron industry in these United States, I highly recommend Robert B. Gordon's book, "American Iron 1607-1900". For anyone interested in the iron side of the railroad industry, this is a fundamental book. It's part of the Johns Hopkins Studies in the History of Technology series.

Posted by Kent Courtney at 2:45 PM