Sometimes I am overwhelmed by the wonderful things that happen to me as a result of music. I've been a train buff as long as I can remember. My Grandfather built an HO layout for me with plaster mountains, a tunnel, two turnouts and a mountain division. I've seen myself in 8mm home movies playing with that layout in my pajamas when I got it for Christmas.  There was a Lionel "Texas Spacial" Alco FA and a Revell F7 in Santa Fe War Bonnet colors.  I remember the Lehigh Valley hopper and a "Radioactive Materials" flat car like they were yesterday. Those two cars are probably in boxes somewhere around the house.

I say all this to put something extraordinary in perspective. Jim Wrinn came to the Steam Into History excursion last Saturday, 27 July 2013. He is the current editor of Trains Magazine - the most important magazine of the railroad industry, as well as a great fan magazine - http://www.trains.com 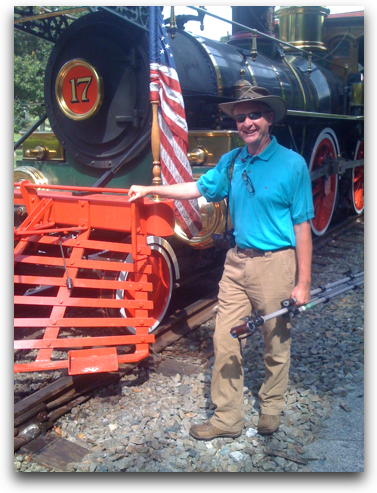 Yes, ladies and gentlemen, Elvis is in the building. He was in disguise with sunglasses and and a jungle hat - admiring Northern Central #17 as she built steam for the day. With some trepidation, I went over and introduced myself. It was easier to meet Vince Gill, but I don't think Jim noticed my "star-struck" glow. Maybe he did, but, Jim was fun to talk with and I soon felt at ease. I needed to prep for the day's performances on the train. Everything has to be portable - meaning strapped to me - so it takes a few minutes. I excused myself and got ready. I was glowing.

As I got to the train, Jim was there taking pictures and he snapped one of me with my concertina, which I use to welcome people aboard and give them that "Happy Feeling". Notice the Trains Magazine lapel pin that Jim gave to me. 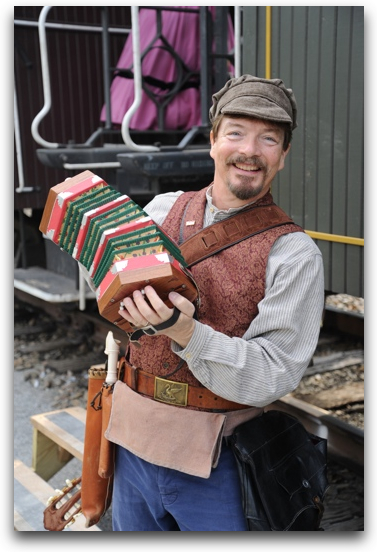 After the train got underway, everything became a blur as I hurried about getting acquainted with passengers. I saw Jim at several grade crossings. He must have planned his train chasing. I bet he's a pro - well, actually, he is! After all, Jim is the Editor of Trains Magazine. He was getting photos on a beautiful summer day in York County, Pennsylvania. Visions of international media exposure for the train flashed through my head. People are going to come here in droves. We're already selling out most of the excursions. We'll have to get another locomotive.

As soon as we got to Hanover Junction, PA, I jumped off the passenger coach platform and started playing "Shenandoah" - one of the most well-known songs of the American Civil War. It sets the mood for the passengers to walk around the restored station complex that Abraham Lincoln passed twice - on the way to - and back from - the Gettysburg Address in November 1863. Lincoln also passed there in State on his Funeral Train on his way back to Springfield, Illinois.

Then, in 1876, Terrance Mullins - a character I portrayed on The History Channel - tried to steal Lincoln's Body from his tomb in Springfield. - http://www.imdb.com/title/tt1374959/

You see - this all ties together.

It is amazing that this universe has allowed me to do so much - to meet Jim Wrinn - to make music - to play trains - to act on The History Channel - and to work on the railroad that carried Lincoln's Body!

Thank you, Jim Wrinn for visiting our railroad and thank you for forwarding that wonderful picture that you took of me.
Posted by Kent Courtney at 7:04 PM