Cutting into Woodland Scenics Foam for a Stream

It is fun to experiment with what a model railroad is going to look like by laying out the pieces as parts of the layout come together. I use Tru-Scale roadbed from Trout Creek Engineering on top of the Woodland Scenics foam risers and inclines to create my mountain narrow gauge layout. That is a good combination for hand laid track or flex track.
While constructing the switchbacks for the HOn3 Monarch Branch of the Denver and Rio Grande Railroad, I noticed that the switchbacks were parallel and close together. I set up an early-version K-27 to see what things looked like. The lines wouldn't be as exciting as they looked when I drew out the plan on paper. Something needed to be added, but I had already glued down the Woodland Scenics foam for support for the trackage. 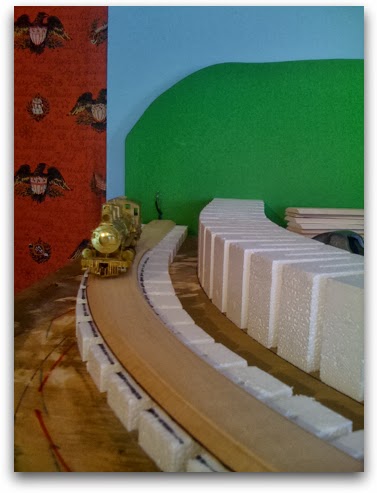 The South Branch of the Arkansas River is a significant feature of the Monarch Branch. It could be added, but would require some surgery. I took a marker pen and roughed out where I thought the watercourse should go. I also used a marker to outline the Tru-Scale roadbed around the 20" radius curve. That would make for continuity over the stream after I built the bridge.
Cutting out the Woodland Scenics foam was fast and easy with a Zona Saw. A flat-bladed wall board tool acted as a thin chisel to separate the previously glued-down foam from the plywood table. 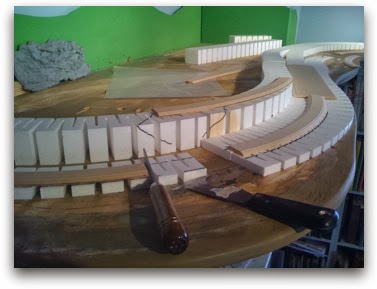 On the two inch foam risers, a little assist was needed from a hammer with gentle taps to separate the foam from the plywood. 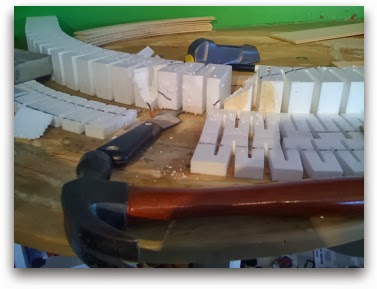 After a some clean-up with a sanding block, most traces of the glue were removed and you could hardly tell that the roadbed had been there. 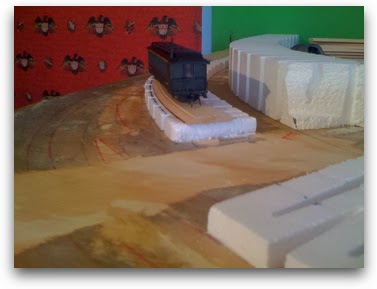 The course of the South Branch of the Arkansas river was starting to appear. Next, there should be some shaping to the stream bottom.

Posted by Kent Courtney at 4:48 AM