One of the most important steps in the process of creation is visualization. The Disney Studios used the term "imagineering" to design the wonderful world of Disney. In Anaheim, on the screen and around the world, people can enter a fantasy land that existed in the minds of creative geniuses.  This is because they create an image in their minds and translate that image into reality.

As a project evolves, I like to continually compare scale size to whatever I am working on. On the Monarch Branch of the Denver and Rio Grande Railroad, I am working in HO scale with narrow gauge. That's HOn3. It is 1/87 scale size. So, one foot of model equals eight-seven feet in real life. 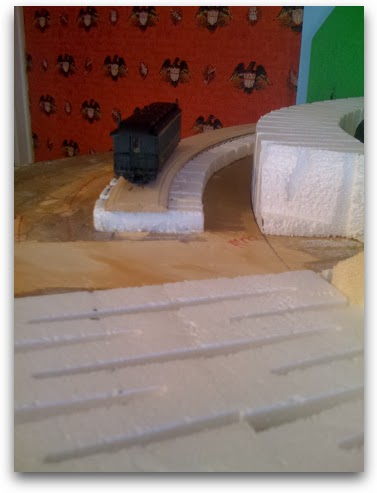 It can be hard to wrap the brain around this proportion. To overcome that mind boggler, I bring in something of a known size. In this case it is a Blackstone Models passenger car. I've ridden the prototypes of these cars. I know what they look like from the inside and the outside. In my mind I have established a sense of proportion - of what the size of the real passenger car is like.

Putting a 1/87th size model of a Jackson and Sharp narrow gauge passenger car on a tabletop tells me what size everything else should be. For me, this sometimes works out better than a scale ruler for figuring out how big a stream should be.

HOW BIG IS A STREAM?

As a "head-check" think of how many feet wide a stream is. Whatever measurement you came up with, you are probably correct. I've seen tiny and big streams. So, without going out to a stream and pulling a tape measure across it, you should be able to establish how big a stream should be by placing a known object near it. 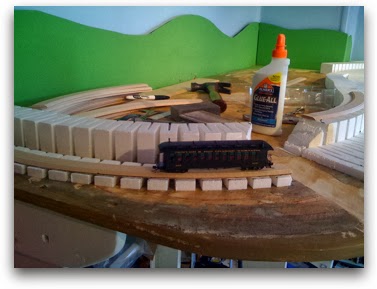 To establish the stream, I sanded off the base paint I had put on the benchwork a while ago. The course of the stream became pretty clear. The next thing I did was mix up a color that was just a little lighter than black, but without looking gray. This would give the stream bed depth. Even though the first batch of this color was mixed by hand, I have since gotten a quart of a close match at Lowe's.  It is Olympic One Flat, D43-6, Black Elegance.

WORK UP FROM BLACK

I first learned the trick of starting with a black base coat on models while painting miniature figures for Le Petite Soldier shop in the French Quarter of New Orleans. It was my high-school job that the owner's son, Mike Weil had gotten me into. Mike - and his Dad, Don - taught me a lot about professional model building. I made a lot of mistakes back then and they both had the patience to help me fix them.

From the black base coat they taught me that it was easy to add colors that had shadows and depth. These are both necessary qualities for a stream bed that is often missing in the model format. 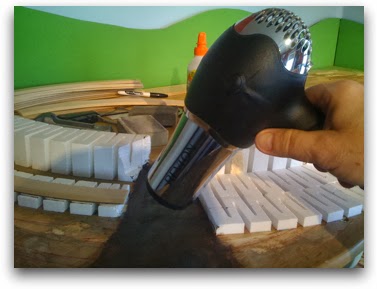 In order to get a fast start on the next layer, I used a hair dryer to speed up the process. After a couple of minutes of sweeping the hair dryer back and forth over the painted surface, I was ready to begin adding highlights.

In a typical Colorado stream, the water crosses submerged rock. Between the rock, sediment in the form of soils and gravel gathers. This is what creates the rippling water and white water of a typical mountain stream. The painting of this underlying rock is a critical step before adding rock material or water.

So imagine a base layer of big rock that has yet to be worn away by the action of the current. Then think of the rocks that tumble down and perhaps even stick up above the water level.  Small rocks, sand, soil and other detritus gather wherever there is an obstruction. If you have ever gone white water rafting, you know these details and how they influence navigation on the waters. 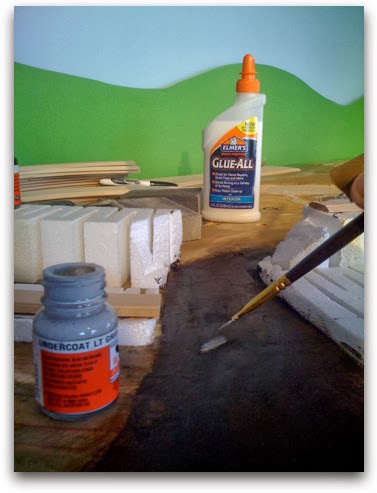 To represent the rock underneath the stream, I started with Polly Scale Undercoat LT Gray.  I thought of the direction of the current - which way does the water flow? As a stream makes a curve, what happens to the water? How would the rocks wear away through erosion? What is the center channel and what are the details of the edges? You can see some of my ideas, below.

Anxious to get on with the painting, I pulled out the hair dryer and sped up the drying process with the sweeping motion of the heat.  This dried the Undercoat LT Gray layer. 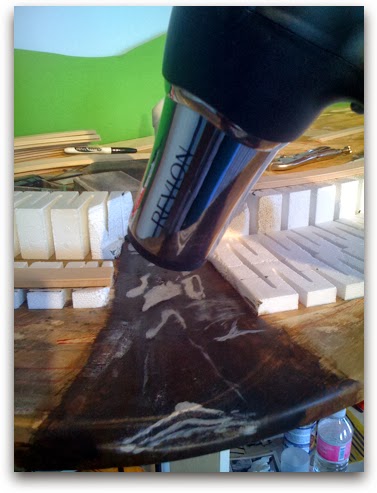 Then, I used some Polly Scale Gray Violet to give contrast to the rocks I had painted before. I painted the edges of the other rocks, almost like adding shadows. I went through this process fairly quickly. 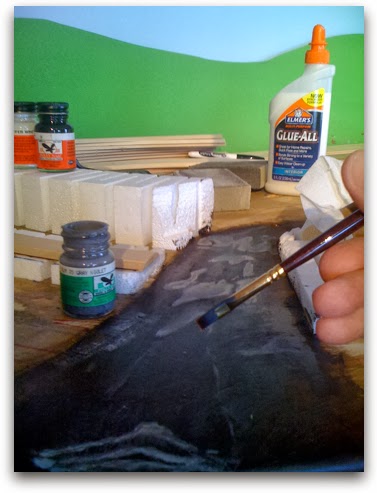 THE SECRET OF LAYERS

Then, I did something shocking. While the gray violet paint was still wet, I got out a paper towel and brushed down the entire area of the stream - longitudinally - matching the downstream current of the water. This gives the bottom of the stream a feeling of flowing. There is implied movement when you look at the results. This also blends the gray violet over the Undercoat LT Gray rocks. 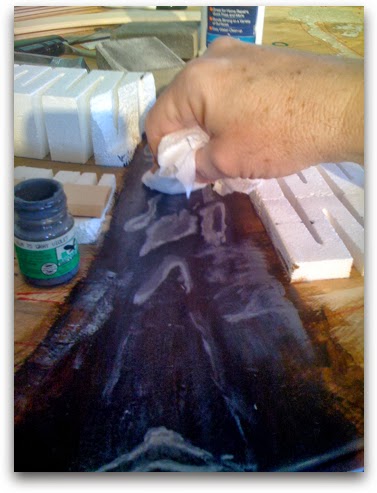 I went back and touched up some of the areas that had smudged too much. Not much touch up was required. The blending effect works well. I should mention that I had sanded the center channel a little more than the banks. You can see the deepening in the center in this bottom photo. But, that depression is not as deep as it looks. I drew on the layers of the edge so that it would look like the shelves of water that would be cascading down. This is not quite a waterfall, but will look good in this location.

I will post my next step soon. I have another trick to show you that implies movement in the next blog. We're not done, yet. There are a lot of steps to go.