Hanging Out with Model Railroaders

One of the great things about model railroading is sharing your enthusiasm with other modelers. Rail fans tend to have a certain personality that lends itself to comraderie. In order to get a model railroad into operation, a person has to have imagination and creativity. Model railroaders can set goals and do the work required to see their dreams come to reality. Almost all model railroaders also have a playfulness about them and a sense of humor. These things, combined with an interest in history, industrial activities and trains in general tend to make railroad people fun to be with. 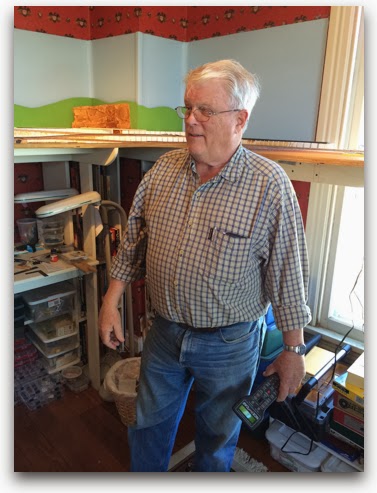 Dick Kilday is one of those delightful model railroaders who are thought-provoking and interesting. You've probably seen Dick giving his tree clinics at the Narrow Gauge Conventions or at other model railroad meets. I'd like to talk Dick into doing a shared blog on his incredibly realistic trees. After you've made a tree following his methods, you will end up wondering if you have to water it once it is installed on a layout. In this view above, he is holding an NCE Power Cab during some experimental operation on my layout. 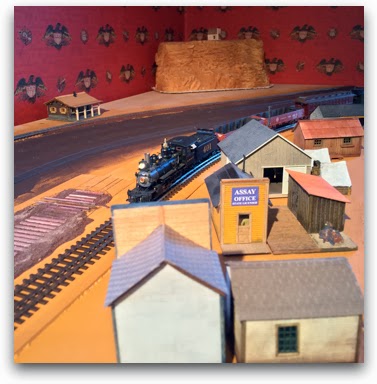 One of the things that we got to talk about in our visit was the concept of creating the illusion of depth. How can you create the illusion of miles on a board that is only a couple of feet deep?

Put the Big Buildings in Front

No matter what the scale, when the big buildings are closer to the viewer and the buildings get smaller toward the rear of the scene, the distance to the background will seem greater. I conducted this imagineering experiment to prove this point with the layout of buildings on my HO model of the Denver and Rio Grande dual-gauge in Salida, Colorado.

The white building, closest to the camera, is a tall building with a false front. It is the Wickenburg, Arizona Telegraph Office by Bollinger Edgarly Scale Trains. From this view the Telegraph Office seems to tower over the other buildings.

In the middle distance is a Kibri log cabin that I modified with HO True Wood Rustic Shake Shingles by Builders in Scale. European plastic kits tend to be smaller than HO scale size. In fact, I put Musket Miniatures children that I had painted on the porch and for the Kibri kit, the children are perfectly sized for adults. So, this less-than-HO building is a good far-away building.

Put the Tiny Buildings in the Back

Just or fun, on top of the mountain, I placed an N scale false front building. It's only a couple of feet back, but it seems very far away because it is a smaller scale.

To further add depth to the scene I have used converging lines to draw your eye to the rear of the scene. Particularly the roof lines tend to point to the mountain in the back. This gives a feeling of being pulled into the scene. In fact, when you first looked at this photograph, your eye probably went to the mountain before it saw the Denver and Rio Grande narrow gauge Class 70 Consolidation by Blackstone.